Oculus now requires Facebook accounts. This is what we know so far:

Oculus, the VR device manufacturer owned by Facebook, announced yesterday that they will phase out existing Oculus accounts, in a process starting from October 2020 and ending on January 1st 2023. The announcement states that:

Aside from bumping up its member count, it seems that Facebook wants to pivot its platform towards incorporating more VR elements. Merging its Oculus user base with the upcoming Facebook Horizon may actually prove to accelerate the acceptance of virtual reality with users that have not joined in the fun yet and may usher in an era of “social VR”. Facebook will now manage Oculus users under the same service and privacy standards as its normal users, providing chats, user and developer-created events, live-streaming, sharing to groups and parties on Oculus devices. 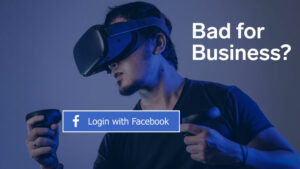 But what does this mean for business customers? Many of the companies that get the greatest benefits from virtual reality will not tolerate social media accounts as the main access to their devices, especially in Europe with data security and privacy being at the forefront. OEMs and others with high security standards are extremely unlikely to view this new policy favorably. Did Facebook anticipate the backlash this would create? Did they just disqualify Oculus devices from many areas of application in the B2B segment?

In their announcement Oculus did not differentiate between consumers and business customers, but the Verge reports that “developers can keep using an unlinked developer account with social functionality, and the Oculus for Business platform uses a separate login process that will remain unchanged.” We will see if this holds up.